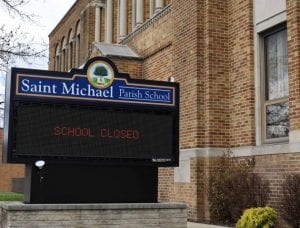 Private Celebrations of Mass are being Livestreamed on Diocese’s Website

By Colleen Rowan
WEST VIRGINIA—The Diocese of Wheeling-Charleston’s Catholic schools are closed and public celebration of Mass in the diocese is suspended until further notice due to the coronavirus pandemic.
All non-essential meetings, gatherings and parish events are to be postponed or cancelled as well.
Bishop Mark Brennan made the announcement March 13 in a video and written message to the faithful. The bishop has emphasized that all Catholics in the diocese are dispensed from the obligation to attend Mass. He has also closed all diocesan services offices in the state. This does not affect Catholic Charities West Virginia.
Bishop Brennan has joined a number of U.S. prelates taking the same or similar actions in their dioceses to stop the spread of the virus.
“While I do not want to contribute to panic reactions,” the bishop says in his March 13 message, “I think it wise to listen to our public health officials when they recommend certain steps to keep our people safe and healthy.”
Earlier that day West Virginia Gov. Jim Justice announced that he was closing the state’s public schools. “This was a very difficult decision but I know in my heart that closing our schools in an effort to protect our kids, our teachers, and all those they come in contact with is the right thing to do,” the governor said.
Because the Diocese of Wheeling-Charleston relies on the same public health information that the governor is relying on, Bishop Brennan said in his message, diocesan Catholic schools and child-care facilities associated with them will follow suit.
“The governor has strongly urged that people avoid congregating in large numbers as a way to prevent the spread of disease,” Bishop Brennan said.
Superintendent of Catholic Schools Mary Ann Deschaine said some schools will offer online/cyber days for students. Schools without that technology in place, she said, have “blizzard packets” provided by teachers to keep students working. The packets contain hard copy assignments for up to three weeks or more. On March 16, Wheeling University moved all courses online. The school is closing residence halls, and students must move off campus by March 22.
Until late evening March 17, when one case of the coronavirus was confirmed, West Virginia had been the only state without a confirmed case.
Even so, state health officials for weeks anticipated the disease would be coming to the state soon, according to a March 13 news release from the governor’s office. At that time, West Virginia, through its public health lab, had tested 21 residents for COVID-19, with 17 results coming back negative and four pending.
West Virginia’s neighboring states have numerous confirmed cases of the coronavirus: Kentucky has at least 22; Maryland, at least 57; Ohio, at least 50; Pennsylvania, at least 77; and Virginia, at least 67.
In his message, Bishop Brennan asked priests in West Virginia to offer Mass privately for their people. “Faithful Catholic people love the Mass, so it is a hardship not to be able to celebrate it,” Bishop Brennan said. “I encourage you to remain steadfast in faith during this time, by praying the Liturgy of the Hours in your homes, praying the Rosary, and by reflecting on the readings of the day. All of these resources are available online. We can look on this development as a penance we do together during this Lenten season and offer our disappointment and suffering up to God. May the Lord give us the joy of celebrating Easter together in good health!”
The Diocese of Wheeling-Charleston is providing a livestream of the Mass on its website on Saturdays at 6 p.m. and Monday through Friday at noon. Mass will also continue to be televised in the Wheeling and Clarksburg areas. Bishop Brennan celebrated the first livestreamed Saturday Mass at the Cathedral of St. Joseph in Wheeling March 15. The Mass was rebroadcast on television the next day in the Clarksburg and Wheeling areas. At the beginning of the broadcast it was noted that this was a private celebration of Mass, and that the cameras were unmanned and the celebrant and concelebrant, Msgr. Joseph Peterson, rector of the cathedral, were the only ones in attendance.
“It is unusual to celebrate Mass without a congregation, but these are unusual times,” the bishop said before Mass began. “Given the fast-moving developments and the need to take prudent measures to protect our people’s health I have cancelled Masses in our diocese respecting our governor’s urging to avoid public gatherings as we face together the outbreak of the coronavirus. It is a hardship for Catholic people who love the Mass not to be able to go. I hope that the situation may soon end and our people be healthy and able once again to go to Mass in their parishes.
“As our country and our world deal with the effects of this new disease which can cause severe health problems and death we rely on God for strength,” the bishop said. “We commend to the Lord those who are sick and those who care for them, especially our medical personnel, that the Lord look upon them kindly and show us his mercy.”
Read the full text of Bishop Brennan’s messages on Page 3 of this issue or on the diocese’s website at www.dwc.org, where the bishop’s video message may be viewed as well.
In addition to livestream and televised Masses, a number of priests in the diocese are livestreaming or posting to YouTube and Facebook pages their private celebrations of Mass.
The diocese’s televised broadcast of Mass in the Wheeling area is Sundays at 11 a.m. on WTRFDT-ABC (GTRF): Comcast channel 4 and channel 804 (HD); Direct TV channel 6; Dish channel 10; Bellaire Cable channel 13; and Over the Air channel 7.3. Mass is also broadcast on WKKX 1600 AM radio at 11 a.m. on Sundays.  The diocese’s televised broadcast of Mass in the Clarksburg area is Sundays at 11 a.m. on WVOYDT2 (EBOY): Direct TV channel 13; Dish channel 52; Spektrum channel 14 and channel 118, 711 (HD); Suddenlink channel 13 and channel 104 (HD).
EWTN offers televised and radio broadcasts of Mass at various times. Visit ewtn.com or local listings for times and channels.