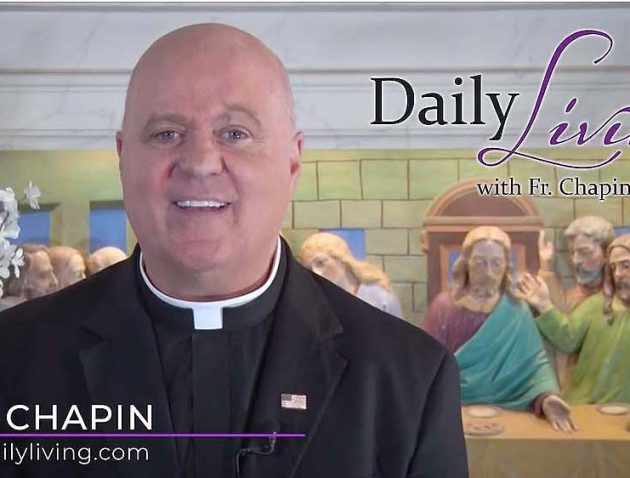 Father Chapin Engler is pictured in the May 31 episode of Daily Living.

By Colleen Rowan
After a long hiatus, Father Chapin Engler’s Daily Living has returned to the Eastern Panhandle. The show is being televised Sundays at 11 a.m. on Nexstar WDVM out of Hagerstown, Md.
Father Chapin is happy to return the show to the people of the area. For those who have never seen the show, he suggests visiting mydailyliving.com to view episodes.
“The tagline is how can we take the good news and apply it into our daily living so that we can become reflections of God,” Father Chapin said. “That’s the mission.”
The show, he explained, is geared toward people that do not go to church.
“They know about Jesus, they believe in Jesus, but they don’t really read the Bible. They don’t really practice their faith, but they’re interested,” Father Chapin said, noting that the show is about teaching, not preaching.
For example, right now he’s talking about fear and not being afraid. He uses the analogy of a parent at a swimming pool encouraging his or her child to jump into the water for the first time. The parent assures the child that he or she will catch him or her. Father Chapin said, “This is Jesus saying ‘Jump, go ahead jump. Don’t be afraid.’”
Father Chapin is currently pastor of the Parishes of Christ he King in Dunbar and Holy Trinity in Nitro and St. Patrick Mission in Bancroft. He started Daily Living 12 years ago, two months after his ordination to priesthood. It all began in Beckley on the radio, and then a move to television. After two years and a few moves, he became pastor of St. Charles Borromeo Parish in White Sulphur Springs, making a connection with Gov. Jim Justice before he was governor. Justice donated funds to help Father Chapin take the show statewide. A donation from an anonymous donor then funded the show for another seven years.
“Once we were on the air statewide, that’s when Catholic TV approached me,” Father Chapin said. At that time, Daily Living was in almost 2 million homes in West Virginia. Catholic TV, out of Watertown, Mass., brought the show to an additional 15 million homes. It was then picked up by The Christian Faith Network (formerly Telecare) in Newark, N.J., adding another six million homes, and the Diocese of Pittsburgh for its cable channel adding another 1 million homes. World Harvest Television on DirectTV also picked up the show.
“Right now Daily Living is receiving partnerships, monthly checks from supporters that completely fund the show,” Father Chapin said, “and we are represented in 43 of the 50 states— every state east of the Mississippi and every state west, minus seven.
“We’ve come along way. We started with one station and 200,000 households and with zero financial support and it’s now 51 million homes, nationally, 12 years later.”
Father Chapin is so grateful that people have been moved enough to support the show. They write letters to him, sharing the impact the show has had on their lives.
“It’s very moving that what we do in the basement of our rectory is affecting Madeline in Carson, Calif., and I read her letter on air and then Margaret of Boston responds to Madeline,” he said. “It’s like a bicoastal connection.”
Father Chapin is also grateful for all of the prayers he has received following his accident and continuing recovery over the past five months. Just a few days after this past Christmas, he was hit by a car, going through the windshield and then landing 30 feet from the car. The accident left him with lacerations on his face a head, and a broken leg, clavicle, scapula, and all of the ribs on his left side. He was in the hospital for a month, and has been in rehab ever since. In the accident, his axillary nerve in his left arm was severed, and he cannot raise his arm. He recently underwent nerve transplant surgery, which could restore up to 70 to 80 percent of functional mobility in the arm. The next surgery will be on his leg.
Father Chapin has received so many letters of support and prayers. “I’m convinced,” he said, “that the daily rosary to the Blessed Mother, and all those prayers have seen me through.”
To make a donation to support the show, make checks payable to Daily Living, PO Box 339, Nitro, WV 25143 or donate online at mydailyliving.com.