Deacon Golna to be Ordained to Priesthood 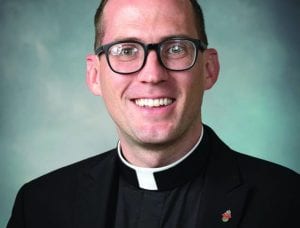 By Colleen Rowan
WHEELING—The Diocese of Wheeling-Charleston joyfully anticipates Deacon Justin Golna’s upcoming ordination to priesthood. He will be ordained by Bishop Mark Brennan at 11 a.m. June 27 at the Cathedral of St. Joseph in Wheeling.
Deacon Golna, 30, is originally from Washington, Pa., and is the son of John and Deborah Golna. He received a bachelor of arts from Wheeling Jesuit University and a master’s in philosophy from Duquesne University. His home parish is Our Lady of Peace in Wheeling.
Following his ordination, he will be assigned to St. Joseph the Worker and Sacred Heart of Mary parishes in Weirton for the summer before he returns to Rome to continue his advanced studies in canon law at the Gregorian University.
“Along with so many others in our diocese, I am thrilled to see Deacon Golna becoming “Father” Golna,” said Father Brian Crenwelge, director of Vocations. “The priesthood, of course, is all about fatherhood. By being ordained, Justin will be laying down his life for his family, the people of West Virginia. At his ordination, he will be conformed to Christ the Head in order that he may teach, govern, and sanctify the people who will be entrusted to him in his priestly office. He will be called to be a spiritual father to all those who he encounters. Justin recognizes this humbling responsibility, and his faithful commitment to our Lord is evident in all his actions. I have known Justin for years now and am looking forward to sharing many years together in priestly fraternity.”
During the ordination, Deacon Golna will stand before Bishop Brennan and promise to serve the people of God as a priest. As he kneels before the altar, the bishop will lay his hands upon Deacon Golna’s head, calling upon the Holy Spirit to ordain him a priest. The bishop will then pray the prayer of ordination.
Deacon Golna will be vested with the stole and chasuble by Very Rev. Dennis R. Schuelkens, V.E., pastor of the Parishes of St. Joseph the Worker and Sacred Heart of Mary in Weirton, and Msgr. Kevin M. Quirk, pastor of the Parishes of St. Vincent de Paul in New Martinsville and Mater Dolorosa in Paden City and the Missions of St. Joseph in Proctor and Holy Rosary in Sistersville.
As he approaches ordination, Deacon Golna said that he is overcome with an overwhelming sense of joy to begin the vocation that the Lord has called him to do in His Church. “It is no surprise to anyone that we find ourselves in strange times, however this time of pandemic has revealed the deep love and need that the people of God have for Christ’s Church and the sacraments that He established,” he said. “Seeing these manifestations of devotion and desire to return to the sacraments has inspired me and increased my desire to be able to offer the sacraments to the people of God who so need them.
“During this time of preparation for the priesthood, I have been overwhelmed with the love and support that people have offered me,” Deacon Golna said. “More importantly, I have been humbled by prayers that people have offered on my behalf so that I may become a happy, holy priest. No vocation is born in a vacuum and no vocation can continue without the support of many people and as I approach the date of my ordination I want to thank each and every person that has helped me to get to this point.
“At my ordination,” Deacon Golna said, “I will be vested by Very Rev. Dennis Schuelkens, J.R., V.E., and Rev. Msgr. Kevin Quirk, J.C.D. Father Dennis was my pastor at Our Lady of Peace in Wheeling. He was instrumental in my growth in the spiritual life and the ways in which he involved me in the parish life, by inviting me to teach the confirmation classes, becoming the RCIA director, and serving at Mass when needed, directly led me to seek to serve the people of God as a priest of our beloved diocese. Rev. Msgr. Kevin Quirk was my spiritual director before joining seminary and his care for souls, his deep knowledge of the faith, and his priestly zeal has continued to inspire me to this day.”
“Please continue to pray for me before and after my ordination!” Deacon Golna said. “I cannot wait to serve the people of God in the Diocese of Wheeling-Charleston as a priest!”