From Abuse to ‘Nones,’ U.S. Bishops Share Concerns with Pope 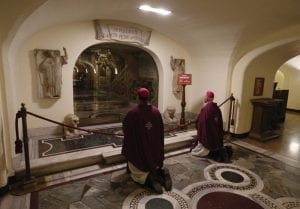 CNS Photo/Paul Haring
Bishop Mark E. Brennan of Wheeling-Charleston, right, and an unidentified bishop pray in front of the tomb of St. Peter after U.S. bishops from the District of Columbia, Delaware, Maryland, Virginia, the U.S. Virgin Islands, West Virginia, and the Military Archdiocese concelebrated Mass in the crypt of St. Peter’s Basilica at the Vatican Dec. 2. The bishops were making their “ad limina” visits to the Vatican to report on the status of their dioceses to the pope and Vatican officials.

By Cindy Wooden and Junno Arocho Esteves, Catholic News Service
VATICAN CITY (CNS) — The timing of the U.S. bishops’ “ad limina” visits to the Vatican was a matter of Pope Francis’ schedule and the regular rhythm of his meetings with the world’s bishops.
But for Archbishop William E. Lori of Baltimore, it also was “providential.”
Because of a papal scheduling conflict, the bishops of U.S. Regions IV and V — District of Columbia, Delaware, Maryland, Virginia, U.S. Virgin Islands, West Virginia, Archdiocese for the Military Services, Louisiana, Alabama, Kentucky, Mississippi and Tennessee — all met the pope together for close to three hours Dec. 3.
Archbishop Lori told Catholic News Service he had worried that a meeting of the pope and 37 bishops at once would dilute the intimacy and dialogue reported by the first groups of U.S. bishops during their visits in November.
However, he said, “that sense of intimacy and that sense of real exchange, free exchange, was very much evident.”
The pope apologized, “as if he had to,” for putting the two groups together, Archbishop Lori said. Everyone in the room sympathized because they knew what it meant to “have glitches” in their schedules.
During the meeting, “the bishops felt free to bring up topics that are joyful and life-affirming, but also topics that are very painful for us,” the archbishop said. Obviously, the topics included the clerical sexual abuse scandal and the need for accountability among bishops.
Pope Francis listened intently and “responded — yes — as our father, but I would say more as an older brother,” the archbishop said, his eyes filling with tears. “It was great.”
The past 18 months have included the scandal of Theodore E. McCarrick, the former cardinal and archbishop of Washington, and a long process by the U.S. bishops as a body to institute a system for reporting the misconduct or crimes of a bishop and for holding him accountable. Archbishop Lori had been appointed earlier in the year to investigate allegations of sexual and financial improprieties made against Bishop Michael J. Bransfield, former bishop of the Diocese of Wheeling-Charleston.
To have the U.S. bishops making their “ad limina” visits now is “very providential, a sign of God’s love for us,” Archbishop Lori said.
“We couldn’t possibly have had that many bishops in the same room talking with the pope and not talk” about the abuse scandal and accountability, the archbishop said.
“What I took away from it is the pope’s utter seriousness in dealing with this thoroughly,” he said, but also that the pope understood “the particular situation in the United States” with the scandals’ impact on the faithful, the ongoing legal aspects of the cases and importance of a bishop being close to his priests.
Archbishop Timothy P. Broglio of the U.S. Archdiocese for the Military Services told CNS that the bishops shared “a very open conversation” with the pope, with no parameters or formalities set ahead of time, and he was moved by the fact “that he wanted to be there with us.”
The pope, he said, “began the meeting by saying, ‘There’s no time limit on this. When have you ever seen a priest or bishop die of hunger? If we have to move lunch, it’s no big deal!’”
Several of the questions the bishops asked and sought the pope’s advice on were about “pastoral problems that we’re experiencing in the United States,” the archbishop said.
“Obviously, we talked about the clergy scandal. But there was an invitation from the Holy Father that we have to keep moving forward,” Archbishop Broglio said.
“He also made a very strong statement about the importance of Catholic schools and that we really have to continue as much as we can with Catholic education,” the archbishop said. “He spoke about the importance of being missionary disciples and reaching out to young people.”
Archbishop Broglio said he asked the pope “a question about the problem of the ‘nones,’” referring to young Catholic men and women who are no longer affiliated with or do not participate in the life of the church.
The pope was quick to respond, the archbishop said. “He turned it around and said, ‘Well you spent all your time with young people. What do you think?’ And I think that was touching that he would even have that reflection about the nature of the Military Archdiocese.”
In the meeting, Pope Francis’ replies to the bishops would include stories about growing up, his time as a Jesuit teacher and his ministry as archbishop of Buenos Aires. Archbishop Lori said he thinks that helped the bishops relax and encouraged them to share with the pope; “it was not at all like a bunch of executives talking with their boss. It really was more like a fraternal sharing. It was really great.”
Bishop Richard F. Stika of Knoxville, Tennessee, said the pope “thanked me for my sense of humor.”
“At the end I asked him what it was like to hear his name over and over at his election (in 2013), so he shared all the moments of the day leading up to his acceptance, and then I asked him what his mom and dad would think of him being pope,” Bishop Stika said, without providing the pope’s reply.
“He was very relaxed, spoke from the heart, used humor, told stories and answered all questions,” Bishop Stika said. Also, “he seems to have a bit of a cold.”