Heart of a Priest – Major Relic of St. John Vianney—His Incorrupt Heart—Coming to Wheeling and Charleston during Holy Week 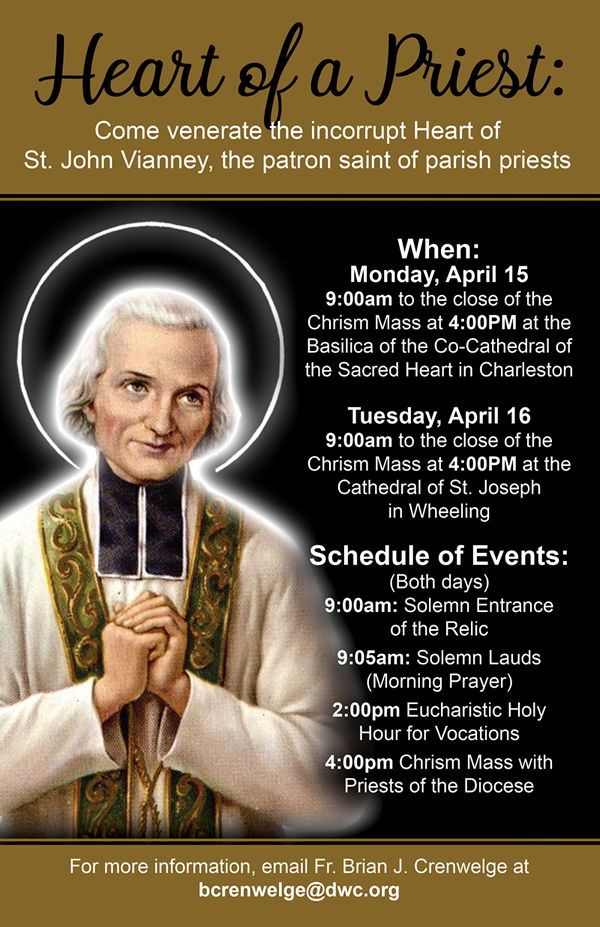 A major relic of St. John Vianney, the Curé of Ars, patron saint of parish priests, will be in West Virginia during Holy Week. The saint’s incorrupt heart will be present for the celebration of Chrism Masses in both Wheeling and Charleston, and will be available for veneration. The relic is contained in a special casing, and will be visible to the faithful. The relic’s visit to West Virginia is part of a national pilgrimage throughout the U.S. sponsored by the Knights of Columbus Supreme Council. The pilgrimage began in November and will culminate in the spring.

Father Brian Crenwelge, assistant director of Vocations for the diocese, is coordinating the relic’s visit to the state. He said this presents a tremendous opportunity for the faithful and priests.

“This is both an inspiring and humbling experience to be able to venerate the heart of St. John Vianney,” said Father Crenwelge, who is also pastor of Mater Dolorosa Parish in Paden City and Holy Rosary Mission in Sistersville. “The life of St. John Vianney provides an example of a priest who had a deep zeal for souls and lived a life of complete self-sacrifice —an example that all of us priests should strive to imitate. Even though he lived in the 1800s, the modern popes stemming back to Pope St. John XXIII have all stressed that even in our own time, priests should live out the priesthood in its duties and understanding as John Vianney did and understood it to be. The faithful desire their priests to be present in their lives and have a heart like Christ’s, as John Vianney was and did, and having his relic available for veneration provides a sacred opportunity for everyone in the diocese to intercede for vocations and for our priests.”

The relic’s presence during the Chrism Masses is especially fitting as these celebrations gather priests from across the diocese for the blessing of the holy oils — gathering the priests of the northern and eastern parts of the state at the Cathedral, and the priests of the central and southern regions at the Basilica Co-cathedral. Father Crenwelge encourages all to attend these beautiful Masses. The relic’s times of arrival in Wheeling and Charleston have not yet been determined, but Father Crenwelge said that more information will be announced in the coming weeks.

The Knights of Columbus has called the pilgrimage “Heart of a Priest,” which refers to the physical heart of St. John Vianney that has resisted decay for more than 150 years and to the good character that should belong to every priest. St. John Vianney is offered as a model for today’s priests, Knights of Columbus officials said. “The possibility of a pilgrimage was offered to us by the shrine at Ars some months ago,” Knights of Columbus Supreme Knight Carl Anderson said. “We now welcome as providential this opportunity to invoke the intercession of the patron saint of parish priests, whose holiness and integrity is a singular model for clergy.”
For more about the relic’s visit to the Cathedral and the Basilica Co-cathedral, contact Father Crenwelge at bcrenwelge@dwc.org. To learn more about the “Heart of a Priest” pilgrimage, visit kofc.org/vianney.

St. John Vianney, popularly known as the Curé of Ars, is revered as a model of priestly generosity, purity and prayerfulness. Born in France in 1786, he grew up in a time of open hostility to the Church in the wake of the French Revolution when the faith was attacked, churches destroyed, and the clergy martyred. Assigned to lead the parish in the small farming community of Ars, Father Vianney excelled at both prayer and work.
He was famous for hearing confessions for up to 18 hours a day as people from across Europe and beyond came to see him. His notoriety throughout the Catholic world grew even after his death in 1859 and he continues to inspire a quest for holiness by both priests and the laity. His incorrupt heart — a major relic — normally resides at the shrine named for him in Ars.

In Catholic tradition, a relic is a physical object associated with a saint that may be offered to the faithful for veneration. Neither the relic nor the saint are to be worshipped, but are rather venerated as holy objects in recognition of the fact that God has worked through the saint.
A major or first-class relic was part of the saint’s body as opposed to something that the saint touched or wore. The term “incorrupt” refers to a human body that has avoided the normal process of decomposition after death. It is a sign — but not a proof — of the person’s holiness, and is sometimes seen in Catholic saints and blesseds.
(Information provided by the Knights of Columbus Supreme Council.)