Rededication of Mosaic has Many Meanings 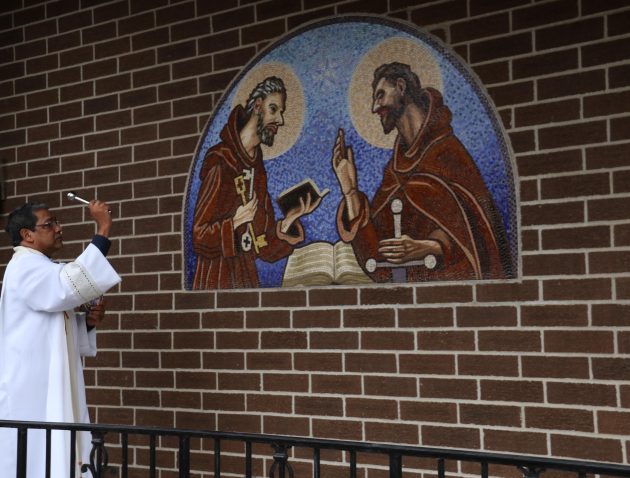 By Joyce Bibey
MONONGAH—The rededication of a mosaic at Holy Spirit Parish in Monongah has many meanings.
The colorful artwork was rededicated Dec. 8 by Father Vincent Joseph, pastor, to the Sisters Auxiliaries of the Apostolate Society and the alumni of the former SS. Peter and Paul School in Marion County. The mosaic is now featured on an exterior wall of the church.
It has significant importance, acknowledging the history of the region and also the saints known as the pillars of the church.
The mosaic was originally dedicated in 1955 for the school and chapel.
At that time, it was inset in an archway above the entrance doors to SS. Peter and Paul School and Chapel. The saints, who are depicted in the art as conversing, greeted the students, staff, and visitors each day.
The colorful portrayal of the school’s namesake illustrates the importance of two most notable saints in the Catholic faith. Saint Peter is holding keys, representing the keys to heaven; while Saint Paul is holding a sword, representative of the saints’ martyrdom and his fierce devotion to Jesus as one of the greatest missionaries of the faith.
When the building was torn down in 2011 the alumni of the school made it a priority to save the intricate artwork. They had the help of Sister Ellen Dunn, O.P., and Diocese of Wheeling-Charleston Building and Properties Director John Reardon.
The rededication acknowledges the tremendous allegiance and commitment of the Sisters Auxiliaries of the Apostolate Society, who once operated the school, and the congregation’s important relief and support role for the families of Marion County and beyond.
The Roman Catholic sisters came to West Virginia in 1910. They were devoted to educating youth and helping the less fortunate. That task was great upon their arrival to the area. Marion County had been devastated by the 1907 mining explosion that took more than 350 lives. National Geographic notes the Monongah Mining Disaster remains the worst mining accident in U.S. history. Historical records estimate the disaster left 250 widows and more than 1,000 children fatherless.
The sisters stayed devoted to those families and their descendants for more than a century, remaining in existence in the Monongah area until the passing of its last member, Sister Mary Stephens Reynolds in 2012.