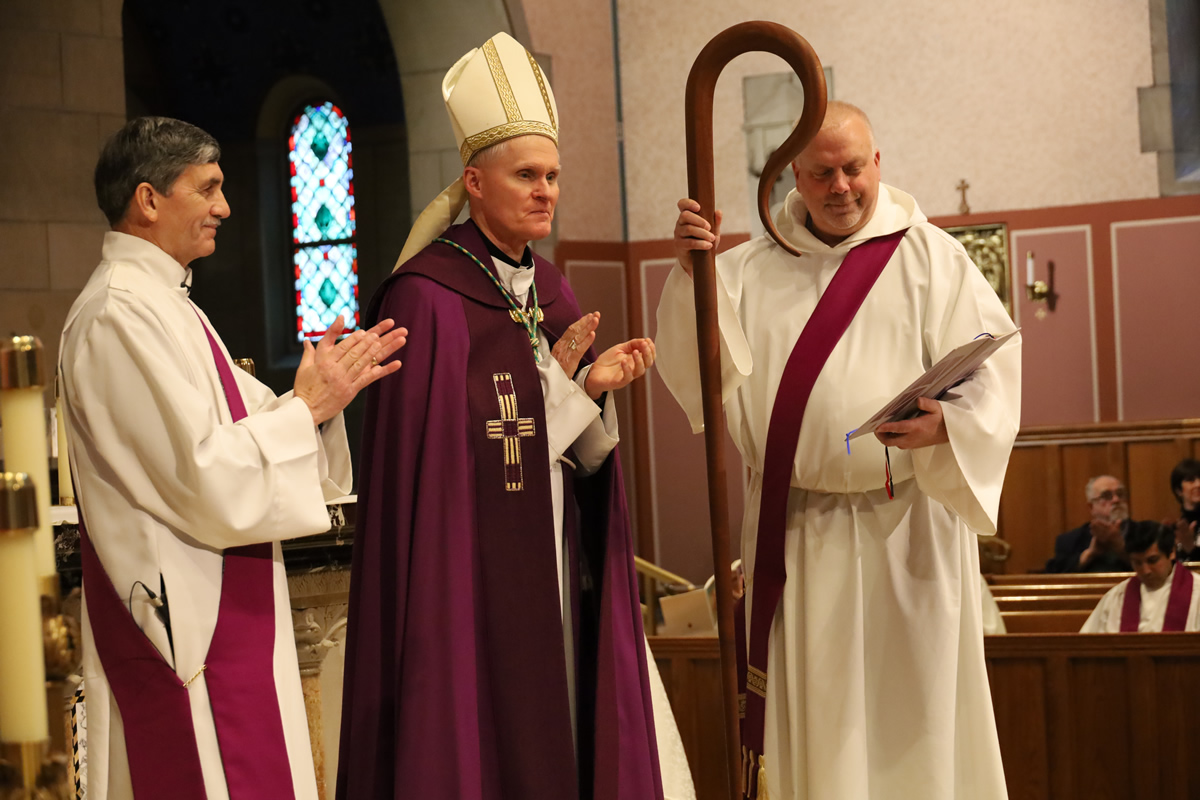 After declaring them members of the elect, Bishop Mark Brennan joins in applause for catechumens at the Rite of Election and Call to Continuing Conversion at the Cathedral of St. Joseph in Wheeling Feb. 29. With the bishop are Deacon Doug Breiding, right, and Deacon Thomas Trunzo. Colleen Rowan Photo

By Colleen Rowan
The Rite of Election and Call to Continuing Conversion has brought 78 catechumens and 108 candidates in the diocese closer to the fullness of the sacramental life.
Three ceremonies were held for the northern, eastern, and southern regions of the diocese. The first was celebrated for the northern part of the state at the Cathedral of St. Joseph in Wheeling Feb. 29.
“My friends, our catechumens and candidates for full communion, we who already call the Catholic Church our spiritual home rejoice that you want to join us as we follow Jesus Christ in our pilgrimage of faith,” Bishop Mark Brennan said to them in his homily at the cathedral. “Our joy is the greater in these turbulent times in which the church has been buffeted by the winds of scandal and controversy. You have seen, through the storm, the light of Christ beckoning you onward. You have heard, above the noise, the voice of Christ calling you forward. And, for this, we truly rejoice.”
The next day, the bishop celebrated with the catechumens and candidates of the eastern region at St. James the Greater Parish in Charles Town. The last ceremony, for the southern region, was to be held at the Basilica of the Co-Cathedral of the Sacred Heart in Charleston March 7 with Msgr. Eugene Ostrowski, V.G.
At all three ceremonies, parish representatives came forward to call the name of each catechumen, who then stood with his or her godparent. Catechumens, accompanied by their godparents, then processed forward to sign the Book of the Elect. They were then declared members of the elect by the bishop in Wheeling and in Charles Town, and by the vicar general in Charleston.
Parish representatives came forward again and announced the number of candidates from their parishes. As the numbers were announced for each parish, candidates stood with their sponsors. Following the affirmation by the sponsors and the assembly, the bishop in Wheeling and in Charles Town, and the vicar general in Charleston, said the church recognized their desire to be sealed with the gift of the Holy Spirit and to have a place at Christ’s Eucharistic table.
During the Easter Vigil at their home parishes, catechumens will be baptized, confirmed, and receive first Communion while candidates will be confirmed and receive first Communion.