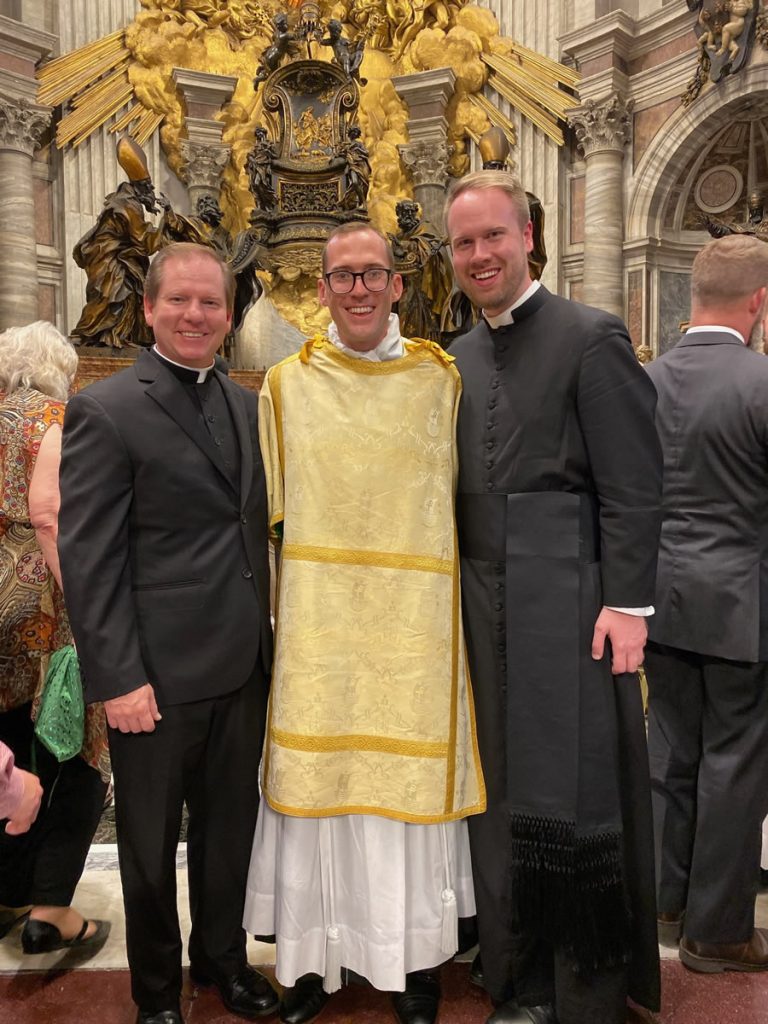 VATICAN CITY—Wheeling-Charleston seminarian Justin Golna was among 32 men ordained to the diaconate Oct. 3 at St. Peter’s Basilica in Vatican City by Bishop Robert Deeley of Portland, Maine. As a transitional deacon, Golna will spend time preaching the Gospel preparing for ordination to the priesthood.
Golna is currently studying for a licentiate in canon law through the Gregorian University in Rome.
“I have been privileged to have known Justin since when I was in seminary, and I have seen his great love for Christ and his church,” said Father Brian Crenwelge, director of Vocations for the Diocese of Wheeling-Charleston, who attended the ordination. “Justin has now been configured to Christ the Servant and has been consecrated for service for the people of God. I look forward to next year when he will be ordained as ‘another Christ’—a priest of Jesus Christ for the people of West Virginia.”
Also attending the ordination was Very Rev.  Dennis R. Schuelkens, Jr., V.E., episcopal vicar for clergy for the diocese.
During his diaconate ordina-tion, Deacon Golna promised obedience to the bishop and his successors and took on the vow of celibacy. He was vested with the stole and dalmatic which are worn by deacons during liturgies. Bishop Deeley then presented the Book of the Gospels to Deacon Golna so that he may proclaim the Good News and model his life after Christ.
“Receive the Gospel of Christ, whose herald you have become. Believe what you read, teach what you believe, and practice what you teach,” Bishop Deeley said as he presented the Book of the Gospels to Deacon Golna.
Deacon Golna’s priesthood ordination is slated for the summer of 2020.
Deacon Golna, 30, is originally from Washington, Pa. He is the son of John and Deborah Golna. He received a bachelor of arts from Wheeling Jesuit University and a master’s in philosophy from Duquesne University. His home parish is Our Lady of Peace in Wheeling.
Look for coverage of Deacon Golna’s diaconate ordination in The Calling Vocations Newsletter in the Oct. 18 issue of The Catholic Spirit.