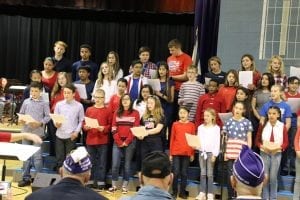 By John Sherwood/Courtesy of The Catholic Spirit

St. Joseph School in Martinsburg hosted their first Middle School Veterans Day Ensemble on November 10, 2019. The program consisted of several patriotic tunes, prayers and a presentation by Mr. Andrew Komonchak, Former Director of the National Purple Heart Hall of Honor. He traced the history of the Purple Heart from the time of George Washington up until today. The award is made to any service member wounded or killed byenemy action.(photo 770)

Veterans attending were encouraged to wear an article of clothing that depicted their service. One Navy Veteran wore a jacket that tracked the ports of call of his ship, the USS Capodanno, a frigate, that was named for Fr.Vincent Capodanno. Father was a Navy Chaplain assigned to the Marines in Vietnam, where he was killed while tending to a fallen Marine. For his heroic actions Fr. Capodanno was awarded the Medal of Honor. In May of 1993 Pope John Paul II imparted an Apostolic Blessing on the ship on the14th anniversary of the death of Fr. Capodanno.