Faithful Happy to be Back in Church 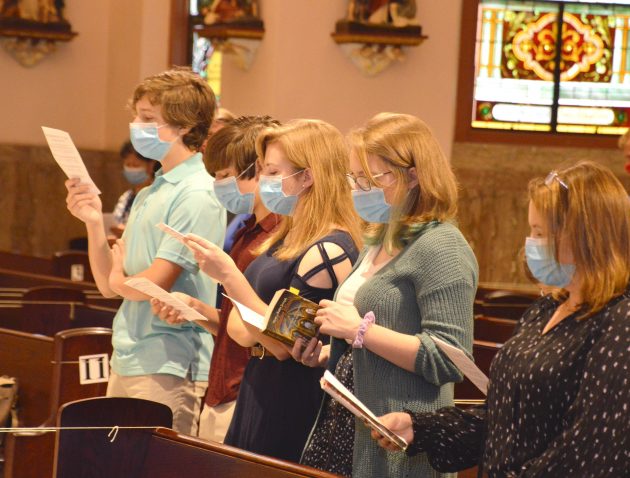 Martina Hart Photo
Wearing face masks and observing social distancing, Parishioners of the Basilica of the Co-Cathedral of the Sacred Heart in Charleston attend Mass May 23. The Diocese of Wheeling-Charleston reopened parishes for public Masses that weekend.

By Martina Hart
CHARLESTON—Catholics of West Virginia were welcomed back to their churches for Masses May 23-24, the first weekend since the suspension of public liturgies in mid-March due to the COVID-19 pandemic. The following weekend at many parishes, catechumens and candidates were received into the church.
“I’m so grateful to be back with my church family and to receive the Eucharist,” said Mary Williams, a member of the Basilica of the Co-Cathedral of the Sacred Heart in Charelston. She attended the 8 a.m. Mass on May 24. “All the precautions and everyone following guidelines carefully is very much appreciated.”
Between 30 and 50 people attended each of the four Masses offered that first weekend, the vigil Mass on Saturday evening as well as 8 and 10 a.m. and noon on Sunday. The regular Sunday evening Mass was omitted for now. In addition, one Mass was offered at noon Monday through Friday, drawing up to 15 participants.
Under current physical distancing guidelines there is room for 75 people in the basilica which normally holds around 350. Parishioners had to preregister for a particular Mass. Upon arrival they were greeted by an usher, who made sure they were wearing a mask (or otherwise provided one to keep), and after sanitizing their hands escorted them to their assigned seats.
Julie and Reed Robinson who attended the 10 a.m. Mass were very impressed with the preparations and logistics put in place to provide a safe environment.
“Father Higgs did an excellent job trying to just explain what was going on and at the same time trying to make it as normal as possible which is very difficult to do,” Reed said. “You feel very confined and isolated in some sense because you’re so far away, but at the same time it’s nice to get back and to see people and to have a community celebration again. I think even though you have access to watching the Mass (via livestream) it’s not even close to participating in person in the Eucharistic celebration and receiving the Blessed Sacrament.”
The Robinsons said it had been hard to stay away from Sacred Heart where they had spent every Sunday for the past 23 years and to not see fellow parishioners that had become like family.
“It was good to see some familiar faces, although just the top half of their faces,” Julie said. “It’s going to be very strange for me as a longtime choir member to not have the choir,” she added. “That’s a big part of Mass for me, so it still didn’t feel normal.”
Organist Greg Gray and cantor/choir director Jeremy Severn led the congregation who were provided disposable worship aids instead of hymnals. Music overall was minimized, e.g. only singing one verse of hymns, in order to shorten the liturgy and ensure enough time between Masses to clean and sanitize the building.
Jack Walsh served as usher for his “regular” Sunday noon Mass. His wife Annabelle remained home with her parents who are considered part of the most vulnerable group and continued to attend livestreamed Mass with them.
“What really hit me emotionally was the usher training on Wednesday (preceding that weekend),” Walsh said. “It was the first time to see many church and Knights (of Columbus) buddies, along with Father Don and Father Binu.”
Confronted also with worries about his parents who live in Rhode Island, he “really appreciated being part of the church and the strength of our parish coming together.” He was also struck by how many had responded to the call for more and younger ushers to help facilitate the logistics.
Very Rev. Donald X. Higgs, Assoc. V.F., rector of the basilica, celebrated each of the weekend Masses with Father Binu Emmanuel, vice rector, as concelebrant. For the distribution of Communion, they were joined by one Eucharistic minister, each of them placed at one of three stations. A lector used a separate microphone to read from.
“It was a comfort to me to see people, particularly as I presided,” Father Higgs said. “It’s challenging not to gather, not to greet people coming in, going out because we haven’t seen them for a while. So, it’s just kind of like a wave from a distance.”
He pointed out the significance of welcoming the congregation home on the Feast of the Ascension, “when we celebrate Jesus’ leaving our earthly home, his return to God the Father.”
Father Higgs commended the work of parish and maintenance staff, ushers and other volunteers, and the cooperation of parishioners in following guidelines. “Everybody had to pull this together,” he said. “There was an effort; it took a lot of people to do it.”
“I was so excited and happy to welcome people back to the basilica,” Father Emmanuel agreed. “I am so grateful to our people for their perseverance in practicing their faith…”
Although they had been united in love and prayer and supported each other by acts of charity, he said, there was a great joy in worshipping God together as a community. While parishioners and priests acknowledged and appreciated the hesitance and caution of those who prefer to wait a little longer before returning to public church services, they felt it was a good start of a gradually evolving process.
“Even in the midst of this awkward time we are reminded again of what remains true, what is important in our lives,” Father Higgs said in his homily that weekend. “The comfort of the Word of God, the nourishment of the body of Christ that you have fasted from for over two months.”
He reminded the congregation of Jesus’ Great Commission to go out to all the world: “We gather now with the whole world, who experience the same crisis, but we don’t alter our course given to us by Jesus, our light. By our caring for each other we teach all nations. May we bring them to Christ who is our lasting hope and will remain with us ‘till the end of time.”