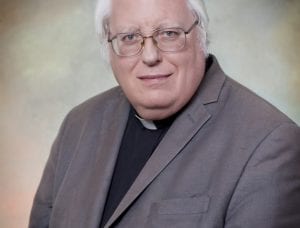 By Joyce Bibey
He has spent the vast majority of his priesthood building bridges towards a better society. Now it is time for him to cross one, and to help a new community of faithful to not only deepen their relationships with Christ, but also empower them to work for social justice.
The resume of the charitable ministries Father Brian O’Donnell, S.J., has been involved with is seemingly endless. He has most recently served as the executive director for the Catholic Conference of West Virginia; the Department of Social Ministries for the Diocese of Wheeling-Charleston; and the Office of Justice and Life. Additionally, he has worked with Catholic Relief Services, WV Council of Churches, Appalachian Institute, Prison Ministries, and Wheeling Jesuit University.
In his various roles he worked with many religious denominations across the state and although their beliefs and practices were quite different “everyone was on the same page when it came to public policy to uphold the basic and crucial fullness of life for everyone – clean air, food, water, shelter, prison reform, and health care.”
It is that experience that will now benefit the laity living near our nation’s capital. There he will serve in a pastoral role for the Catholic community of Holy Trinity Parish in the Georgetown section of Washington, D.C.
Father O’Donnell said his past and future steps are all guided by Christ as he eagerly serves as “a disciple among disciples.”
He said it is John’s gospel that has fueled his mission. Just as we are taught in John 14:1-6, our life on earth is a journey and we are to learn and follow in the ways of Jesus Christ to have eternal life.
“The theme of my life has been to build bridges,” he said. “They are necessary if we want to serve like Christ.”
Thus, it made perfect sense for Father O’Donnell to spend the greater part of three decades helping behind the scenes as an advocate for fair health care, mental and behavior health services, hunger, opioid addiction recovery, mine safety, and pro-life.
“When you get a broad and deeper look at the issues, it presses you to want to do more,” he said. “There are so many dedicated people out there, but it is often as if we are rolling a boulder up hill and it takes years to make progress.”
He said along the way you meet more and more people who have ideas to make the load easier and sometimes you find out that even though “our efforts aren’t always successful they were worthwhile.”
He will always cherish working with the people of West Virginia and his time serving at Wheeling Jesuit University.
“It’s been very humbling,” Father O’Donnell said. “I’ve been able to work with and meet some real heroes fighting for social and spiritual justice in West Virginia and all over the world. It is bittersweet leaving, but for all of us comes a time we are challenged to make a change, and after contemplating in prayer this is my time.”