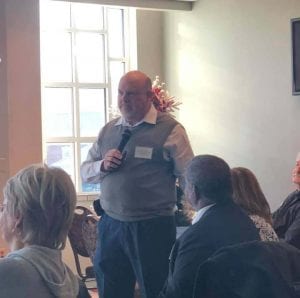 By Colleen Rowan/The Catholic Spirit
PRINCETON—”It was a very meaningful day for the people of our area,” Sacred Heart, Princeton, parishioner Gina Boggess said after the recent Creating Connections for Healing Conference on Substance Abuse.
“We left with a much better understanding of addiction and realized there is an amazing amount of support in our community that we didn’t know about,” she said. “Our challenge now, is to go back to our churches and figure out how we can be a part of the solution.”
The southern region has been hit hard by the state’s opioid crisis, and faithful like Boggess are working to bring healing to their community. It is a crisis that has left very few untouched.
“Nearly everyone I know has been affected by the opioid crisis in some way,” said CCWVa Southern Regional director Matt Atwood. “I think it’s important for everyone to gain as much knowledge as they can about this issue and the best ways to help those who are suffering.”
The conference was held at the Chuck Mathena Center in Princeton Nov. 16, focusing on the faith community’s possible responses to the crisis. Three main points were: alcohol, tobacco, opiates, and other substances cause changes to the brain; the brain can heal; and healing takes place in community.
Sponsored by the Diocese of Wheeling-Charleston’s Department of Social Ministries, Catholic Charities West Virginia (CCWVa) and the West Virginia Council of Churches, the conference had the goal of reducing stigma so that healing can occur.
A total of 72 people attended.
Boggess expressed her appreciation to Father Brian O’Donnell, S.J., executive director of the diocese’s Department of Social Ministries, for reaching out to the community and encouraging a conversation addressing the opioid epidemic. Boggess is also grateful that the people of the communities of the south were involved.
“It was so uplifting to have a planning committee where we had representatives from Princeton/Bluefield Sacred Heart churches, St. Francis de Sales in Beckley and St. Peter’s in Welch come together as a team,” she said. “We had over four counties represented at the conference—Mercer, Raleigh, McDowell, and Greenbrier.”
Jim Copolo is a lifelong resident of the area, and a member of Sacred Heart Mission in Powhatan. He is committed to his beloved community, and served on the planning committee as well.
“The conference was so wonderful and inspiring,” he said. “The people were so engaged from tears and shouts of AMEN. It reminded me of the 1970s. The Spirit is moving all over all over this land!”
The keynote speaker was Derek Wilson, chairman of the Mercer County Substance Abuse Prevention Coalition, who is also a minister. He explained the real and physical changes that occur in the brain when someone uses drugs. He also stated that it will take two generations to get the drug epidemic under control.
“It was very disheartening to hear that statement, but was necessary for us to understand that this is truly an ongoing battle to save lives,” Boggess said.
A panel of local leaders discussed the cycle of addiction. Prevention was discussed by Greg Puckett, executive director of Community Connections, Intervention, and Stacy Hicks CEO/Princeton Rescue Squad. Treatment was discussed by Lisa Thompson Jones, CEO/Southern Highlands Community Mental Health Center. Nic Webb, Community Engagement specialist at Recover Point and Founder of Phoenix House, talked about recovery.
Father and son, Leon and Brad Brushade a huge impact at the conference where they shared their family’s journey through addiction.
“Leon lost a son to addiction,” Boggess said. “They share their story and how they used that dark and difficult time in their lives to help others.”
The father and son have gone on to establish a 14-acre Recovery Center called Brian’s Safe-house in Beckley to help men recover from drug addiction. They also opened a safe house for women in Beckley called Sparrow’s Nest.
Also speaking was Marissa Sanders from Charleston, who talked about kinship care. She spoke about the process of fostering and provided numerous resources for those taking care of children whose parents are struggling through addiction.
Boggess said that six ministers from various faith denominations were also in attendance. “It was truly an ecumenical gathering,” she said.