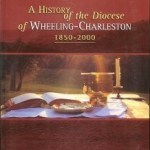 Faith in the Mountains: A History of the Diocese of Wheeling-Charleston 1850-2000 by Tricia T. Pyne. Published in 2000. Hardcover. 128 pages. This heavily illustrated book represents a comprehensive history of the Diocese of Wheeling-Charleston from its earliest days through the year 2000. Each bishop is chronicled including his contributions to the diocese as well as the changes and happenings in West Virginia at that time. Many of the religious orders who called our diocese home are detailed as is each parish within the diocese. You may purchase a copy by contacting Jon-Erik Gilot at jgilot@dwc.org or at 304-230-2079. Each book costs $20.00; please include an additional $5.00 for shipping and handling. 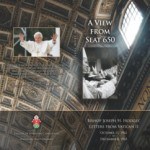 A View From Seat 650 – Bishop Joseph H. Hodges’ Letters From Vatican II – October 11, 1962 – December 8, 1965 To celebrate the Year of Faith and the 50th anniversary of Vatican II, the Diocese of Wheeling-Charleston has published “A View From Seat 650,” a collection of letters written by Bishop Joseph H. Hodges while attending the Vatican II Council from 1962 – 1965. The letters, originally published bi-weekly in the West Virginia Register (now the Catholic Spirit), are being made available in this single volume for the first time in nearly 50 years. Bishop Hodges richly details each session of Vatican II, explaining the importance of Council decisions and their impact on our Diocese and the Catholic faith as a whole. The letters further detail meetings, discussions and encounters with other bishops, priests, religious communities and families throughout our Diocese. A View From Seat 650 contains 40 letters penned by Hodges, more than two dozen photographs from Vatican II as well as photographs of Bishop Hodges’ Council medals and ring. Published for the first time is the homily delivered by Bishop Hodges at the funeral for Archbishop Swint and the Intervention delivered by Bishop Hodges during a Council meeting in November of 1963.

The Mystery of the Wizard Clip – Supernatural visitations in old Virginia and their remarkable legacy By Raphael Brown and Rev. Msgr. John L. O’Reilly About the time George Washington was ending his term as first President of the United States, in a rural community now known as Middleway, West Virginia, an unusual story was unfolding. Spirits were persecuting the family of Adam Livingston, a Lutheran farmer. At night strange rumblings terrorized the household. A large stone was seen whirling about their living room. Sheets, dresses and boots were neatly cut into crescent-shaped strips by invisible shears. Everyone began talking about the “Wizard Clip.” A Catholic priest ended the demonic manifestations, but the story was just the beginning. For many years the Livingston’s were visited by a mysterious “Voice” who instructed them in the Catholic faith. In 1802, Livingston donated a parcel of his land – Priest Field – to the church. The Voice predicted it would become “a great place of prayer and fasting and praise. “During the years 1978 – 1984, Monsignor John L. O’Reilly and Most Revered Joseph H. Hodges, Bishop of Wheeling-Charleston, fulfilled the promise of the Voice by establishing Priest Field Pastoral Center. Today Christians find there a peace the modern world cannot give. This book contains the original “Mystery of the Wizard Clip,” published by Raphael Brown in 1949, as well as a history of Priest Field Pastoral Center written by Rev. Msgr. John L. O’Reilly. A new introduction by David Guiney is included as well as numerous photographs and appendixes.

Images of America – Catholic West Virginia Overcoming its tumultuous beginnings, the Roman Catholic Diocese of Wheeling-Charleston has matured into a distinguished and active voice for West Virginians. One of the most unique aspects of the diocese’s 160-year history is the diversity of the landscape, culture, ethnicity, and dialect that characterizes the state’s identity. From Wheeling to Beckley and Martinsburg to Parkersburg, the story of our diocese comes from the individuals who established and nurtured the Catholic faith in their local communities. Without generations of the dedicated faithful, the diocese would not have thrived. Through a variety of images, this book tells the story of the generations that continued striving to give a voice to this unique Catholic community. In addition, professional researchers and local readers alike will find this volume’s rare perspective of history through the lived experience of the subjects refreshing.

Copies may be ordered via Amazon or Arcadia Publishing.